The History Of Humble TX 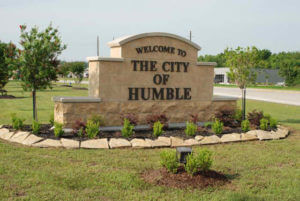 Generally believed to have been established around 1828, the beginnings of the city of Humble lie in the first settlers who began moving to the area to farm. Joseph Dunham is thought to be the first person to move here, and is in fact the first person to be buried in the Humble cemetery as well.

However, the settlement in Harris County took its name from Pleasant Smith “Plez” Humble, who moved to the area shortly before 1889. He started out as a ferryman, but frequent and dangerous floods forced him to abandon the business and move his family to safer ground. He then opened a post office in his house, giving rise to the town’s name.

Business soon began booming in the town thanks to a large supply of timber in the surrounding areas. C.O. Bender built a sawmill to accommodate this demand. Later on, oil was discovered in the region. The Humble oil field became the most productive one of its kind in Texas by 1905. In fact, Exxon was originally known as the Humble Oil and Refining Company.

After the oil madness died down, the people of the town returned to their regular livelihood of lumber, trucking, and farming. Life was quiet until the Houston Intercontinental Airport opened nearby in 1969. This resulted in more and more residential areas being developed, which in turn led to a demand for quality healthcare services, schools, and a variety of commercial establishments to suit the growing population’s needs.

Today, the city of Humble is counted within the larger Houston metropolitan area. Its population as of the 2010 census is a little over 15 thousand and covers an area of 26 sq. km. People here enjoy hot summers and fairly mild winters, just like their early ancestors.